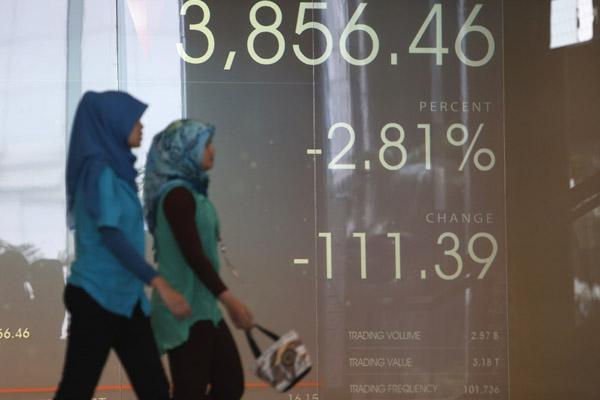 After a tumultuous 2013, Indonesia’s capital markets have shown cause for cautious optimism at the start of 2014, as shown by the return of foreign capital inflows into the stock market, and the government’s global bond issuance in January being oversubscribed 4.4 times. Despite the encouraging signs, however, Indonesia has plenty to do if it wants to catch up with neighbours like Malaysia and Singapore, finds Ranajit Dam

In 2013, some of the world’s most promising emerging markets experienced a rough ride, and Indonesia was no different. After Ben Bernanke announced in late May that the U.S. Federal Reserve’s “quantitative easing” programme was coming to an end, investors began pulling billions of U.S. dollars out of emerging market bonds and equities; in Indonesia, total foreign net selling of stocks totalled 18.9 trillion rupiah ($1.6 billion) over the course of the year. The Jakarta Composite Index, Indonesia’s benchmark stock index, had hit a record high at 5,200 points in late May, but following Bernanke's speech, the index immediately plunged, finally ending the year 18 percent lower than that peak.

The initial months of 2014, though, have seen Indonesia’s stock markets make cautious progress. In the first five weeks of the year, the index rose 4.5 percent, and total foreign net buying amounted to 2.6 trillion rupiah ($215 million) in that time. And the bond market has been going from strength to strength: Indonesia was the fastest-growing bond market in East Asia in the third quarter of 2013, with a growth rate of 3.9 percent, according to the ADB’s Asia Bond Monitor, and the government's global bond issuance in January was oversubscribed 4.4 times.

Although there is no doubt that Indonesia’s capital markets have made visible, significant progress since the dark days of the Asian Financial Crisis of 1997, it still lags significantly behind its regional peers. The country’s market capitalisation of listed companies reached close to 50 percent of GDP in late 2013; in comparison, the number for Malaysia was close to 150 percent, according to consultancy firm Strategic Asia. The Indonesia Stock Exchange (IDX) had 489 companies listed around that time, compared to 577 in Thailand (which has a much smaller economy) and a whopping 5,267 in India.

“Indonesia’s capital markets are growing, although rather marginally,” says Fahrul S. Yusuf, a partner at Soewito Suhardiman Eddymurthy Kardono (SSEK) in Jakarta. “More companies had IPOs and rights issues in 2013 compared to 2012, and market capitalisation in 2013 was greater than in 2012. However, Indonesia is still very far behind compared to Thailand, India, Japan, Malaysia and China in terms of the number of local investors and issuers.”

Noting that Indonesia’s capital markets are “not performing at their optimum,” Melli Darsa, senior partner at Melli Darsa & Co, points out that there are a number of reasons why progress has been slow relative to Indonesia’s vast potential. “There are some macro matters that have to be addressed first, but you also have to realise that for the past two or three years, the whole financial institution regime has been in transition,” she says. “Among other things, there was the establishment of the Financial Services Authority of Indonesia or OJK, which was established in 2011 to take over from Bapepam-LK to supervise the financial services sector. There have also been major changes to bank ownership rules, and all this, combined with the global crisis, has meant that capital markets have been operating in a time of transition.”

Additionally, she says, that as regulations have been tightened following the global financial crisis, with the focus more on prudential principles, and with anti-corruption enforcement being stepped up, a lot of OJK officials have tended to be more careful and conservative, and this has also caused a lot of extra red tape. “Most of all, of course, is that there’s still the perception and the reality that there is both legal uncertainty and the lack of modernity in Indonesia, not to mention the lack of certainty in enforcement,” she says. “So, as much as we want the capital markets to move quickly, there continues to be inconsistent and lax enforcement, while some of the laws and regulations continually change. And this is why we’re always slower than other jurisdictions.”

Yusuf says that Indonesia, at this point, requires deeper capital markets as they will bring stability. “Deeper capital markets will help Indonesia gain a firmer footing in facing global economic turmoil,” he says. “The number of Indonesian investors in the Indonesian capital markets is unbelievably low compared to the entire population of the country. More local investors means more financing in the local currency for the primary market, such as export-import, working capital and infrastructure. It also means more liquid secondary markets, which will also help keep the money flowing in the region and promote better protection, particularly from external events like U.S. tapering.” He adds that while the rupiah seems to have halted its precipitous decline, deeper capital markets will also contribute in preventing further financial crises and channel funds to promote a sustainable recovery.

The extremely low level of domestic investor participation is a major concern that the government and the IDX are grappling with, says Strategic Asia. Only about 500,000 people, or just 0.2 percent of the total population, are listed as registered investors in Indonesian capital markets, notes the consulting firm, adding that Malaysia has between five and six million registered investors, or about 20 percent of the total population. It attributes the high taxation rate on buying bonds, which is between 15 to 20 percent for local investors, as a key factor that discourages local investment.

Darsa notes that even though Indonesia has a large population of young people and a rising middle class, local investors are few, as the perception is that only those who have inside information should dare invest in capital markets. “This is where education and enhancement of awareness is needed, “she adds. “But before that of course, the market has to be proven to be completely trustworthy and I think that’s what the regulators are trying to do by being prudential and careful. But on the other hand, what they forget is that process is becoming so cumbersome and lengthy, it discourages many.”

She says that if Indonesia attains its goal of having deeper capital markets that operated efficiently, it would mean a better environment for both retail and institutional investors, as well as companies using the markets to raise capital. “There would be a higher level of corporate governance, because that means that more companies would be able to fulfill the requirements for listing,” she says. “It also means that people would feel confident in investing, as they would be assured that their rights as account holders were protected. So, deeper capital markets would actually symbolise that we would have gotten to the next level.”

Yusuf says that the government can start to encourage local investment by promoting mutual funds, which are generally perceived as more stable and safer than stocks. “The current regulatory regime only allows mutual funds to be marketed through investment managers and banks,” he says. “Other financial institutions should be allowed to do the same, such as insurance companies, pension funds, multifinance companies and other types of securities companies such as underwriters and brokerage firms. We understand that the OJK has prepared a draft regulation in this direction.” He adds that investing in mutual funds can be a good investment starting point before investors start moving into stocks. “Moreover, the types and availability of capital markets products in Indonesia is still very low and this needs to be developed and expanded,” Yusuf says. “There is also very little general promotion and education regarding capital markets, and what limited efforts there are in this direction, are focused on Jakarta. The authorities or securities companies could start expanding their educational and promotional programmes to other cities, particularly those outside Java.”

According to Yusuf, one of the main impediments to domestic companies listing on the IDX is regulatory compliance. “Before a company can go public and be listed, initially a registration statement must be submitted with an ‘approved’ by the OJK,” he says. “This process can be very daunting and difficult given the scrutiny from the OJK, which is understandable considering the inadequate disclosure system, mainly caused by poor enforcement and lack of appropriate technology.” However, he adds that the OJK is planning to simplify the IPO registration process by allowing e-registration and also trying to improve the information disclosure system by promoting an e-reporting system.

Darsa states that many of the challenges for local companies stem for the demand from the IDX that they transform themselves. “Most Indonesian companies were originally state-controlled or family controlled, and nearly all of them have assets in the form of land, which can only be owned by individuals,” she says. “So, many companies have land assets in the names of individuals, leading to a tradition of mixing private matters with company matters. Extricating one from the other can lead to problems.” State-owned companies, on the other hand, have good governance, but their directors may have political affiliations or loyalties, and thus they might not be always doing things in the best interests of the company. “So, while the rules are generally fair, they run into difficulties when it comes to the realities of the origins of the company.”

Another major issue, she says, is knowing which laws to follow. “Say, for example, the company is complying with municipal laws,” Darsa says, “But then there are regional laws and national laws, and these may not always be consistent. So even if they want to comply, they cannot comply.” Additionally, she says, the cost of compliance, especially when it comes to getting the right licences, can be very high. “A lot of licences are renewed on a yearly basis, and the reality is even after you pay for the licence, there are other additional costs to be paid,” she says. “Sometimes when the company is yet to go public, it can afford not to fully comply. But once they are actually trying to list, the regulators become more strict, so it becomes harder and harder for a lot of companies.”

Finally, companies find that apart from dealing with the uncertainty, they can also be told at a very late stage that certain practices that hadn’t gotten them into trouble so far, are not allowed any more once they are listed.  “This is where there is a disconnect,” Darsa says.

Yusuf of SSEK says Indonesia can adopt the best practices of its more successful neighbours like Indonesia; for example, currently, Indonesian capital markets rules do not accommodate foreign companies offering securities publicly in Indonesia, other than by way of the Indonesian Depositary Receipts (ADR), which since being introduced in 1997, have not been particularly popular with foreign issuers to offer their securities in Indonesia. “Allowing foreign issuers to list their shares in Indonesia should improve the efficiency of the Indonesian capital markets and introduce local investors to securities from the world’s multinational corporations,” he says.

Darsa says that while the IDX, the SGX and the Bursa Malaysia are at different points in their development, there are still certain things that Indonesia can learn. “In Singapore, for example, they are very tough and thorough when it comes to listed companies, but the differences are the turnaround time and also the intent behind it,” she says. “The intent behind it is to ensure investors feel really protected and also reduce uncertainty. And of course, they work very efficiently.” She says that this is the reason why Indonesian companies have found the experience with other stock exchanges extremely pleasant. “With Bursa Malaysia, I found the experience completely painless, which was very positive,” she says. “Additionally, Indonesia can improve education and enhance awareness, so that not only can people invest more safely with less risk, but also embrace more sophisticated products.”