Protests Continue in Hong Kong, Leaving Businesses at a Crossroads 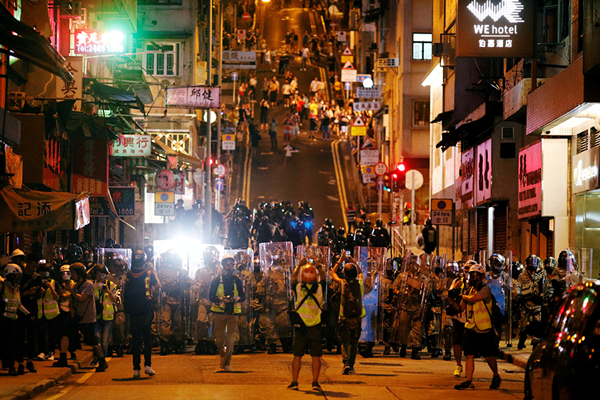 Police officers line up during a protest against what the activists see as excessive police force against protesters during previous demonstrations, near China’s Liaison Office, Hong Kong, China July 28, 2019. REUTERS/Edgar Su

A “dead” extradition bill, viewed as a symptom of the city’s erosion of rights, is haunting Hong Kong, as protesters continue to take to the street every week in the thousands, and teargas and riot police become the norm. But as the city grows accustomed to instability, businesses are growing increasingly nervous about what Hong Kong’s future may look like.

Davyd Wong, general secretary of the Association of Corporate Counsel Hong Kong (ACC), says the extradition law has been “divisive” within the legal community. “It’s probably fair to say that a lot of people feel this is another body blow for the rule of law and judicial independence in Hong Kong — and there have been quite a few since 1997,” he tells ALB.

“For lawyers, our duty is to protect the rule of law, therefore many in our profession have spoken up for it, which is great. But what is even greater is that a large portion of the Hong Kong community has also spoken up for it too.”

The belief that these latest events, exacerbated by a lack of communication from the Hong Kong government, are part of a broader trend is exactly why protesters and official bodies have taken such a staunch position – even more surprising in a city where political sentiments are often contentious.

In early June, thousands of lawyers held a rare silent march against bill. In July, the Hong Kong General Chamber of Commerce called for the formal withdrawal of the extradition bill, and the Australian Chamber of Commerce Hong Kong echoed similar concerns saying: “Much of Hong Kong’s success as a major international financial city stems from its autonomy, rule of law and independent judiciary, as well as in the freedoms enjoyed by Hong Kong people.”

But while official bodies are speaking out, Hong Kong tycoons are not taking any risks, with many reportedly in the process of moving their personal wealth offshore in reaction to the chaos, according to Reuters – and there are concerns that businesses may soon follow.

While Wong isn’t surprised to see businesses and investment being courted by competing markets, he believes Hong Kong still has value for companies – although this may be on borrowed time. “Hong Kong competes with a lot of other places for business and investment, and it’s no surprise that those in other places have taken advantage of these recent events for their benefit, so we also need to be conscious of that as well,” he says.

“The reasons why people like to do business in Hong Kong hasn’t changed — it still has a highly skilled workforce, very good infrastructure, good rule of law, very corruption-free institutions, a geographical advantage, all those reasons still exist. But, those thingsonly work in Hong Kong’s favour up to acertain point. If people don’t believe the trend of things will improve — and one of those things is stability — those advantages are negated, so it’s incumbent on everyone to ensure action is taken to sure things up,” Wong adds.

With the extradition bill no longer going ahead, protesters have changed their message, with many now calling for universal suffrage, concerned that this erosion of the city’s liberties will only continue without this. For many Hong Kongers, the protests are no longer simply about extradition law, Chief Executive Carrie Lam’s “mishandling” of the political situation, or police brutality. They are also a fight for identity.

“My personal opinion is there’s no avoiding the deeper underlying issues that have been raised. There’s a trend of chipping away at the rule of law and at ‘one country, two systems’ and that must be stopped,” says Wong.

“More broadly, the view is there must be some restarting of the discussion of political change in Hong Kong. I think that’s a big can of worms for anyone to open, but at the end of the day, that’s a root cause of why everyone is on the streets. The extradition bill and the way it was handled is just the lightning rod that brought people together. It’s no good to just say the bill is dead and we can move on, because that doesn’t solve the underlying issues,” he says.