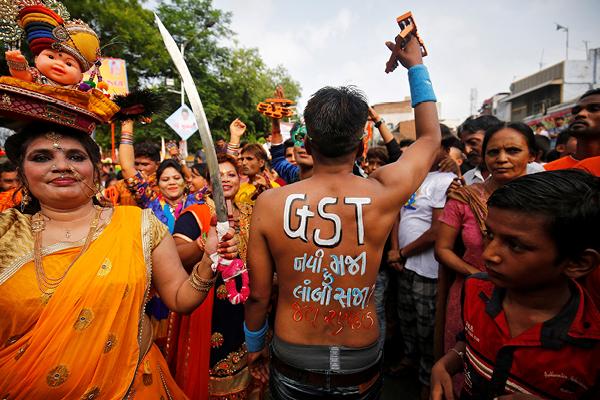 December marks five months since India introduced its landmark Goods and Services Tax (GST). In spite of the tax first having been discussed decades ago, Indian businesses still struggled to adjust to the requirements of GST once it was launched on July 1. And as companies were impacted in the short term, law firms played an important role in easing their pain.

At midnight on July 1, India launched its Goods and Services Tax (GST), possibly one of the most important economic reforms undertaken by the country since its independence.  The government, headed by Prime Minister Narendra Modi, promised a modern, transparent and technology-driven indirect tax system that would subsume 17 central, state and local taxes in line under the principle of “one nation, one market, one tax.”

Even though the tax had first been discussed in the late 1990s, talk of the current GST had only picked up steam under the Modi administration, and its launch caught Indian companies off guard. Businesses slowed production ahead of the rollout of GST to minimize tax complications while shifting to the new system, which in part resulted in slowing economic growth. They also struggled to get prepared for the the first two monthly tax-filing cycles, according to local media reports.

An informal survey of Indian law firms that specialise in tax found that the specific impact of GST had varied among clients depending upon their sector, size and the level of preparation. Apart from the obvious financial impact, GST also impacted many businesses in terms of their IT systems, operations, procurements, sales, and supply chain.

It wasn’t all bad, though. While manufacturing sectors like FMCG, consumer durables, IT, and pharmaceuticals witnessed only a minor adverse financial impact, some of the other sectors like automotive and cement rejoiced over an effective reduction in tax incidence on their supplies.

“Overall, the manufacturing sector in general had a more or less neutral financial impact given the policy level endeavour to keep the effective tax rate structure close to cumulative impact of the extent indirect tax levies,” says Puneet Bansal, managing partner of Nitya Tax Associates. “The service sector, on the other hand was adversely impacted with effective tax rate increase on most services.”

The biggest challenge was technology. GST, as a technology-driven self-policing system, ushered in a paradigm change in taxation, wherein the only interface between the authorities and the taxpayer is technology. Among the compliance requirements to be undertaken by businesses were those related to transaction-level reporting and online matching of input and output taxes.

As a result, the onset of GST brought with it a need to revamp IT processes, especially invoicing patterns and the extraction of tax reports. Due to these requirements, law firms say that various businesses including micro, small and medium enterprises (MSMEs) had to realign their accounting software and IT systems in line with the new tax requirements. As a result, cash flow seems to have been hit because of confusions around the data requirements for availing transitional credits.

As the repercussions from GST affected businesses in the months following its launch, law firms played an increasingly important role in helping clients cope. To ensure a smooth transition for its clients, tax firm Vaish Associates Advocates helped them in identifying key areas of impact across the value chain of operations, suggesting alternate business solutions and models wherever required, with a view to minimise adverse effects and maximise savings.

“However, the biggest problem area for all the clients remains to be the tax filings and compliance. Companies are finding it extremely difficult to manage the compliances in-house, given the complexities and the ambiguities and are largely relying upon external consultants like us to hand-hold them at least during the initial few months,” says Shammi Kapoor, a partner at Vaish.

Nitya Tax Associates imparted various training sessions and orientation workshops to make its clients aware about basic GST laws and the high-level impact thereof on their business. It also helped its clients deal with initial technological glitches and procedural issues faced in the wake of limited understanding of GST laws.

Meanwhile, Lakshmikumaran and Sridharan says that it provided input on legal and technical issues, including reviewing of the IT system results from a tax standpoint. “We also engaged in providing assistance in contract reviews, classification of goods and services, guidance on impact on business parameters due to legal regime change, and legal issues surrounding anti-profiteering provisions,” says partner L. Badri Narayanan.

Most lawyers feel it is difficult to judge the impact of the GST roll out for at least another few months, adding that the government is also taking steps to remedy the initial glitches.

“On the government’s front, the two most crucial components of the GST infrastructure are the GSTN (goods and services tax network) system and the tax administration. The government has spent immense effort and resources on preparation of these, however, the experience since implementation shows that GST as a tax regime is still work-in-progress,” adds Kapoor.

On the taxpayers side also, most of the outreach efforts of the government to create GST awareness have been with the bigger industry players which anyways have the resources and teams to support them. Kapoor adds, “However, the government has not adequately anticipated the problems of the small and medium businesses that do not have the required infrastructure to be GST compliant and are currently struggling with the complexity of procedures.”

India’s real challenge now is in having a robust and dynamic IT system so as to handle and record all GST transactions. “The GSTN had been designed to cater to a pan-India requirement. However, initial reports and user experiences suggest that significant improvement and development is necessary. The Government has taken this up on priority basis and the challenges will ease off in the short run,” says Harsh Shah, a partner at Economic Laws Practice.

But things are getting better. According to a report released by global research and analytics firm Crisil, barring the small- and mid-sized firms and certain investment linked sectors such as real estate for whom the cash flow is likely to remain under stress, most other companies are likely to see their balance sheets improve from now onwards.

Further, the increased tax base should result into reduction of tax slabs and tax rates over a period of time, as indicated by the India’s finance minister Arun Jaitley.

By simplifying the tax system and eliminating the inefficiencies thereof, India should be able to better attract foreign investors, adds Kapoor. As projected by economic experts, the implementation of the GST is expected to increase the Indian GDP by 1 to 2 percent in the coming years.