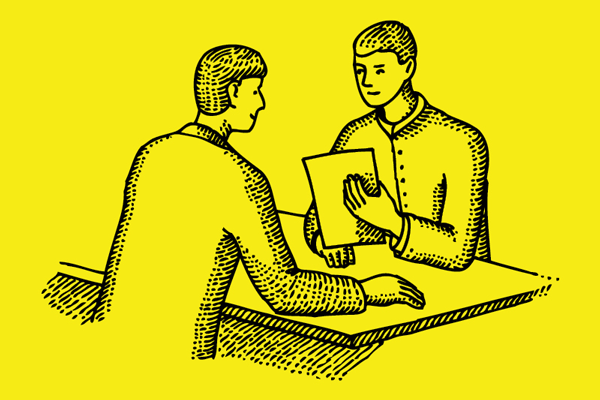 The era of the gig worker is well and truly upon us. As outsourced talent and temporary workforces grow increasingly common, businesses to have greater flexibility than ever before when it comes to staffing arrangements. However, questions remain as to whether Asian jurisdictions have the legal frameworks in place to keep up with this brave new world.

A 9-to-5 deskbound office job that ends when staff leave the physical confines of an office is quickly becoming a hazy relic of the past, as is staying in full-time roles for the entirety of one’s career. Gig workers, or temporary employees who contract with organisations for short-term engagements, are part of a global trend, and one that is rapidly growing.

As the nature of work radically changes, companies and workers are entering uncharted territory as they negotiate new relationships and arrangements. But while the face of employment has shifted in recent years, the letter of the law remains intrinsically tied with traditional employment arrangements, often leaving gig workers with scant protection, health benefits or retirement funds.

While in Asia, a few markets have begun to address this and are slowly making progress – in Korea, the Supreme Court in 2006 adjusted its criteria around employment relationships to be more reflective of the increasingly flexible means of employment born from the gig economy, for example – this is far from the norm.

Nevertheless, despite the general lack of preparedness from a policy perspective, when it comes to the gig economy, workers continue to pursue these forms of employment. After all, they also come with greater flexibility and place employees in the driver’s seat when it comes to deciding how and when they want to work.

“The general trend towards flexibility is really growing,” says Jennifer Van Dale, Eversheds Sutherland’s Hong Kong and Asia-Pacific employment head. “It’s not just for working parents. We saw it with millennials, we see it with Gen Z. There are certain generational differences in what people expect and what they’re looking for in work, and this has contributed to the overall trend.”

But while there is little doubt the ubiquity of such roles is on the up, Van Dale says in Hong Kong, Singapore and across other Asian markets, “in terms of legislative change, there hasn’t been that much of an impact yet.”

“In most places in Asia, there are two legal categories for people who provide services. They are either employees or independent contractors. In some other places, particularly in Europe, there’s an intermediate category which is sometimes called ‘a worker’, or ‘a dependent contractor’, or similar. This is a hybrid where the law recognizes that the individual depends on the company (the “employer”) for most of the individual’s income or livelihood. They don’t have employment status but they will have additional rights to a “mere” independent contractor.”

“For example, they might receive some entitlements that employees get, but they wouldn’t necessarily have all the protections that employee have, such as for unfair dismissal,” she adds.

While there are a few exceptions, typically in Asia this intermediate category has yet to make an appearance in legislation resulting in people having to fall into one of two categories “either they’re an employee, or they’re an independent contractor,” Van Dale explains.

This parochial form of categorization doesn’t appear to be set to change in the immediate future. “I haven’t actually seen much in terms of policy that is really making a difference in any meaningful way. I’ve spoken to some very senior secretarial-level individuals in Asia and it’s fair to say that most are in a ‘wait and see’ mode,” says Van Dale.

Duncan Abate, head of Asian Employment and Benefits Group at Mayer Brown, tells Asian Legal Business that while contracts may have not undergone radical changes, the gig economy has been responsible for something of a shift in mindset.

“The gig economy has more impacted the way employers think, and how they operate, rather than just contracts,” Abate says. “Employers look at their business model and they look at ways in which they can be innovative, concerning using employees or individuals, and then only then do they try to put that down in the form of employment contracts.”

While this affords businesses and

their staff greater agility and flexibility, it also protects businesses legally. “In the gig economy, in a true gig situation, they’re not employees. They’re independent contractors. Largely because you don’t have mutuality of obligation. They don’t need to turn up for work at any given time,” Abate explains.

“A lot of that legislation was created at a time when work was very easily defined. Nobody envisioned Uber drivers or Deliveroo workers, or things like that. If you were an employee, it was very clear; you got up in the morning and you threw your satchel over the back of your shoulder and wandered off to work in a factory, or into an office.”

A TIME FOR REEVALUATION 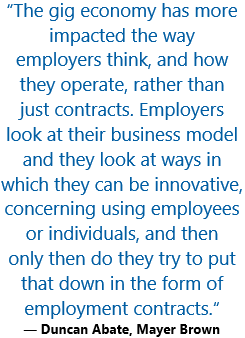 While much employment legislation in Asia was clearly authored in a different era, the lack of clear updated policy is placing the pressure on workers and businesses to figure out the blind spots. The burning questions remain – what will new legislation look like, and is it actually necessary?

Abate says there are two common arguments around potential policy change. He expands on these: “One, no you don’t because individuals necessarily have massive freedom because they’re not employees, they’re not beholden to an employer. There is no mutuality of obligation by definition, and therefore you don’t need to prescribe time off for them because they are their bosses.” he says.

“There is a state argument, however, that you need to protect individuals against themselves. People shouldn’t be allowed to work as an Uber driver for twenty hours a day, 365 days a year. Also, you should mandate that people have put money into pensions to ensure they’re not going to be a burden on the state,” he adds. While there are no concrete changes as of yet, Abate notes this poses “a really interesting question.”

But this also sparks deeper considerations around benefit expectations more generally, given the changing dynamics of work. Who should be responsible for providing benefits, such as pension and healthcare, for workers – businesses, as they traditionally have been, or should this be a matter for politicians to tackle?

“That’s the million-dollar question,” Van Dale says. “I don’t think that the starting point should be the legal analysis where we figuring out which category people go into. The legal category is just a tool to achieve a policy objective. A government or a society decides what it wants people to have and what is considered a basic entitlement. For example, we recognized that people can’t work their whole lives and will need some money when they’re old, so we set up occupational pensions. They generally work in the same way all over the world: during your employment you and your employer put money away, and then you have that money when you’re old. Setting aside state pensions, the fact that that is connected to employment is simply a result of history.”

But while this arrangement was established in the past, Van Dale says the shift in employment status provides an opportunity to re-evaluate the rights of workers more generally.

“Today, we can pick this apart and ask, what do we want people in our society to have? When do they get it? For example, do we want to have universal healthcare? Do we want everyone to have some kind of retirement benefit? Do we want everyone to have at least two weeks off every year, so we can rest? Do we want people who have caring responsibilities to be able to continue to work and still meet family needs? Whatever that benefit is, it is a policy decision,” she adds. “The next question is how we implement it and who pays for it. We don’t have to implement it through employment. I think we’re getting it backwards if we start the analysis by deciding whether an individual is an employee or independent contractor. Rather than having the courts figure out which legal bucket people should go into, I think governments and policy makers should be thinking about new ways to ensure that people get the benefits that a society is offering, because it doesn’t necessarily need to be through a job. Once we are at that point, whether a gig worker is an employee or an independent contractor will not be an important question.”