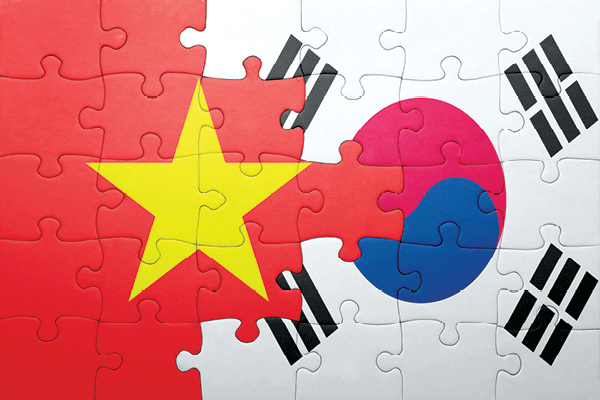 South Korea is the largest foreign investor in Vietnam, being the source of a cumulative $50 billion of investment as of the end of 2016. As the two countries marked 25 years of diplomatic relations in 2017, their economic ties are only set to intensify, and this promises increasing work for lawyers in both nations for the foreseeable future.

Vietnam today is a magnet for foreign direct investment (FDI), particularly from other Asian countries. The ASEAN member received an estimated $16 billion in FDI in the first 11 months of 2017, up 11.9 percent from the same period in 2016, according to Reuters.

And top among the list of investors is the Republic of Korea. According to the Korea Trade-Investment Promotion Agency (Kotra), South Korea is today the largest source of foreign direct investment (FDI) in Vietnam, accounting for nearly a third of all FDI in the Southeast Asian nation.

As of the end of 2016, South Korean investment in Vietnam hit a cumulative $50 billion, with the capital having been poured into 5,773 projects across latter country. Japan was second with $42.4 billion, followed by Singapore and Taiwan, which invested $32.8 billion and $31.8 billion respectively.

Part of the draw remains the lure of lower costs, particularly as China has become increasingly expensive as a manufacturing destination. A Reuters report found that there has been no sign of an impact on investment plans since U.S. President Donald Trump abandoned the proposed Trans Pacific Partnership (TPP) trade deal which had been expected to benefit Vietnam more than any country. But costs aside, Vietnam also scores highly on middle management, work ethic and government policy, Reuters adds.Additionally for Korean companies, Vietnam scores high marks in its location, as well as its membership of the ASEAN, which combine to give them access to one the world’s most exciting regions economically – Southeast Asia.

Additionally, Korea and Vietnam also share many cultural similarities. “One of the main obstacles to overseas investment is a poor understanding of the recipient country’s unique culture and sentiments. In this sense, Korea and Vietnam have a relatively small difference, which is one of the reasons why Korean companies are able to gain a smooth entry into Vietnam and strengthen their position in the market within a short time frame,” says Eric Eunyong Yang, a partner at Bae, Kim & Lee.

The bulk (around 71 percent) of South Korean FDI has gone into manufacturing and processing, followed by real estate at 14.8 percent and construction at 5.4 percent. Apart from manufacturing, there has been a growing interest by South Korean companies in the services and distribution sectors along with wholesale and retail, says consulting firm Dezan Shira. In addition, last year saw a growing interest in the food and banking sectors. South Korean firms are also looking to increase their investments in the agriculture, forestry, and fishery sectors, taking advantage of the preferential tariffs, the firm added.

Over the past couple of years, Korean investors have also been dipping their toes in sectors like technology. “Technology is one sector that has seen great interest by investors,” says Logan Leung, a foreign counsel at Rajah & Tann LCT Lawyers. “Other sectors include education and healthcare, particularly, for clinics. On our end, albeit of a smaller volume and scale, we have seen growing interest by Korean investors -- including funds and VCs -- in Vietnam’s technology and start-up scene,”

Furthermore, the insurance sector is also drawing significant interest from Korean companies, says Leung. Even though the sector saw growth of 20 percent in 2017, the number of insured people in Vietnam still accounts for only a small percentage of the population, and holds a great deal of potential..

An additional boost to Korean businesses has been the rapid spread of Korean culture in Vietnam, much like in other Asian countries. “Amid growing credibility of, and customer loyalty to Korean brands due to the positive impact of the Korean Wave in Vietnam, Korean companies are and are keeping a close eye on the entertainment sector as the Vietnamese market has high-growth potential and is expected to serve as an alternative to China’s film industry that is heading towards instability owing to its extreme sensitivity to political issues and strict industry regulations,” says Cheolhyo Ahn, a foreign attorney at Bae, Kim & Lee.

While most Korean investments were intended to use Vietnam either as a production base or an export base, the focus has now shifted to mergers and acquisitions with the aim of developing a presence in the Vietnamese market.

“This trend,” adds Yang, “is expected to continue, driven by the rapidly expanding Vietnamese middle-class and a large and youthful population.”

That said, doing business in Vietnam can be tricky.

Contrary to the business conditions of Korea, Vietnam still has a lot of industry specific restrictions in establishing a wholly-foreign invested company, says Zunu Lee, partner and head of the Southeast Asia practice group at Yoon & Yang. “This may pose a challenge to Korean enterprises trying to operate a business in Vietnam. Thus, it is a prerequisite for a Korean enterprise expanding into Vietnam to see whether the business it intends to operate would require the cooperation of a local partner or could be performed by itself,” he says.

“Even in cases where such operation is allowed under Vietnamese laws and regulations, it is advisable to check the relevant governmental authorities’ approval practice because there is a tendency of the governmental authorities rejecting such approval for the operation of businesses for various reasons (e.g., under a circumstance where an amendment in relevant laws are being discussed, it might be very difficult to make progress on the regulatory approval during the pendency of amendment of laws),” he adds.

Yang of BKL says that Vietnam has been relentless in its effort to attract foreign investments, vigorously opening up its market to foreign companies and amending applicable laws and regulations. ““However, we often see foreign investments by Korean companies, financial institutions in particular, going down the drain due to the lack of regulations on advanced financing tools, which become a barrier to the completion of projects with complex deal structures that have been successful in Korea,” he notes.

Meanwhile, Leung of LCT notes that from time to time, regulations have not been consistent in their provisions and their application by the authorities across varying provinces. “We are generally aware of these potential divergences and can guide investors through both the maze of regulations and practices on doing business in Vietnam,” he says.

Although the country’s government’s attempt to open up the market through legal reforms is encouraging, the execution creates uncertainty among foreign companies, says Ahn, who notes that presently a lot of apprehensions from Korean investors lie in the uncertainties in doing business in Vietnam, particularly where tight regulatory controls may remove their incentive for doing so.  “If Vietnam makes improvement in the area through both regulatory and practical approaches, Korean companies and financial institutions are likely to ramp up their investment in Vietnam,” he adds.

Lawyers agree, however, that the government is in other ways doing its best to make life easier for investors. “We are seeing legislative ‘grey areas’ being clarified, and gaps being filled, providing certainty for investors interested in this field,” says Leung, who adds that the government has eliminated many issues that foreign investors previously faced, after considering their requests.

And things are set to get even better. “The passage (and actual implementation) of investment regulations to facilitate market entries, including removal of administrative red tape and simplification of tax processes, could do wonders in increasing the extent of Korean investment in Vietnam,” Leung adds.