The two firms share close ties – they were both co-founded by shipping lawyer Tang Chong Jun. Tang set up Tang & Co in Hong Kong in 2018, and co-founded Helmsman with commodities and shipping specialist Ian Teo in 2019.

According to a press release, the formal association will help the firms expand their businesses in both jurisdictions. They will focus on commodity derivatives and regulatory restrictions, marine insurance, shipbuilding and ship-repair, and exploration and mining. 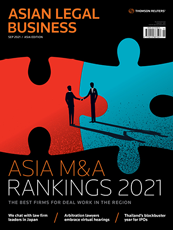