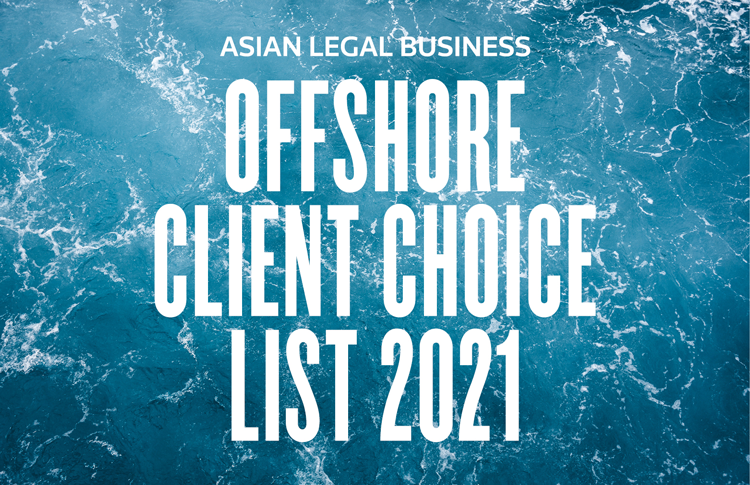 In its annual list, ALB picks out Asia’s outstanding lawyers working with offshore law firms. These legal professionals have exceeded client expectations and requirements, delivering high-quality advice and support, and being recognised by their clients for the same. The lawyers in the list were selected based on client recommendations sent directly to ALB. A few lawyers have been profiled below.

Bickley, who has spent 27 years in the legal industry, has been with Conyers since 1994. A capital markets, corporate, finance, and mergers and acquisitions specialist, he also advises on private equity, venture capital and securitisation and structured finance.

Bickley is particularly experienced in initial public offerings and listings of shares of companies on the Main Board and the Growth Enterprise Market of The Stock Exchange of Hong Kong, Science and Technology Innovation Board (SSE STAR Market) in the PRC, and stock exchanges in other jurisdictions including Australia, London, Singapore and NASDAQ. His experience extends to debt financings, schemes of arrangements, restructuring exercises, fundraising exercises and private equity investment. He has also advised in a number of shareholder disputes and offshore contentious matters.

Some of the significant matters that Bickley has advised on include acting for Semiconductor Manufacturing International Corporation (SMIC) in connection with its award-winning RMB46.2 billion ($6.6 billion) listing of the A Shares on the SSE STAR Market. Bickley also assisted TPG Global and Ontario Teachers’ Pension Plan Board on its award-winning acquisition of 35 percent of Dream Cruises and also counselled MBK Partners HK in connection with the privatisation of eHi Car Services.

He was recognised in the 2019 and 2020 editions of Offshore Client Choice List by Asian Legal Business.

“It is always a pleasure working with Chris, who matches his quality, commercial advice with boundless energy. Chris is always available, no matter when the issues arise, and is very quick to focus on the crux of the issues. Put simply, he’s our go-to guy,” says a client. Another client says Bickley is “very proactive and knowledgeable with good customer focus. Ensures timely delivery of work.”

JENNY NIP, partner and head of the PRC group, Campbells

Nip, who is the head of the PRC group at Campbells, is responsible for the China practice of the firm. She specialises in all areas of corporate transactions including capital market transactions, mergers and acquisitions, privatisation and downstream private equity investment deals.

She has acted on hundreds of IPOs, some of which include the Hong Kong IPOs of WH Group, Akeso, Peijia Medical, XD Inc, Redsun Properties Group and Huifu Payment, and U.S. IPOs like those of Hywin Holdings.

Nip was also featured in the ALB Offshore Client Choice List for the years 2016, 2017, 2019 and 2020. She has been pivotal to Campbells’ growing corporate finance practice and has helped the firm be recognised as one of the top four offshore law firms for HK IPOs by value in 2020. A few of Nip’s clients are New World Development Company Ltd, Jebsen Group, Jiangxiaobai (Baijiu) Group, Huafa Group, Seedland Group, Oppo Group and China Development Bank.

“Jenny is a commercially very sophisticated lawyer, having profound understanding and hands-on experience on corporate, funds and financing transactions,” says a client. “On top of that, she has come to form a deep understanding of Chinese business culture and is very versatile and flexible when approaching Chinese clients or matters with a China background. She is truly one of a kind in terms of advising Chinese clients on complex offshore matters.” Another client says the experience of working with Nip is “very smooth and worry-free.”

Noble, who has more than 20 years of legal experience, is the Asia head of the litigation, insolvency and restructuring team at Carey Olsen which currently has the largest offshore litigation team in Singapore. He was formerly the managing partner of the Singapore office of another leading offshore firm and is said to be the only litigator in Singapore who is Cayman and BVI admitted.

Among his noteworthy matters, Noble had successfully obtained sanction from the Cayman Court to pursue third-party funding for a very wealthy claimant in a decision that drastically expanded the availability of litigation funding under Cayman law. He also acted in the first-ever derivative action brought on behalf of a Liberian company in the BVI Courts in which his client was successful in obtaining judgment in her favour.

Additionally, he acted in proceedings on behalf of an individual who invested more than $130 million in a hedge fund program administered by an international bank. The proceedings involved a two-month trial in the Financial Services Division of the Cayman Grand Court and culminated in appeals that were heard before the Privy Council in London.

“James is very prompt and thorough in providing legal advice and deliverables, and has a very pleasant, professional approach in his communication and working relationship. His relaxed, steady approach always gives you a lot of confidence,” says a client. Another praises Noble for being “highly knowledgeable with an emotionally intelligent persona.”

ANTHONY OAKES, partner and head of banking and finance for Asia, Ogier

Oakes, who is a banking and finance, capital markets, structured finance, corporate, non-contentious restructuring and insolvency expert, has spent more than two decades in the legal industry. He was earlier in Sydney and relocated to Hong Kong to join Clifford Chance, where he spent 12 years advising on capital markets transactions, private equity, structured finance and bank lending.

Oakes moved to Beijing in 2012 to spend a year and a half studying Mandarin at the Beijing Language and Cultural University. In 2014, he joined Ogier’s Hong Kong office and was promoted to partner in 2015. He is currently leading the banking and finance practice in Asia and overseeing the growth of the 11-lawyer team.

He works with some of the leading investment banks and financial institutions in Asia and other parts of the world and advises on a number of landmark and award-winning transactions.

Oakes acted as Cayman counsel on an innovative $1 billion perpetual securities issue by Lenovo Group, the world’s biggest seller of personal computers as well as acting as Cayman Islands counsel to Garuda Indonesia on its $500 million sukuk. In addition, Oakes assisted as BVI counsel to Contemporary Amperex Technology (CATL) on its $1.5 billion debut offshore bond issuance.

Among his accolades, Oakes has been featured in Asian Legal Business’ Offshore Client Choice List for six consecutive years (2016-2021).

“Tony is proactive and provides clear and helpful advice,” says a client. “He understands the commercial aspects to a transaction and advises accordingly. He also has a good bench of associates who keep the process moving forward.” Another praises Oakes’ “great personality, expertise in his area and well-rounded advice that is readily usable.”

Plowman, who specialises in investment funds, established Ogier’s Hong Kong office in 2007 at the age of 33 and was made partner in 2010.

Plowman is presently the head of Ogier’s highly successful investment funds practice in Asia, which is now one of the largest in the region, with 14 dedicated funds specialists. As practice partner, he has overseen the growth of Ogier’s Hong Kong office, which currently employs over 110 people across its legal and fiduciary teams.

He has also established longstanding relationships with some of the region’s most sophisticated and respected fund managers.

Plowman, who has been featured in ALB Offshore Client Choice List for five consecutive years (2016 to 2020), has been a part of various deals.

He is also the British Virgin Islands counsel to All-Stars Investment Cayman in relation to the establishment and offering of All-Stars XMI as a private equity fundraising vehicle in a $1.1 billion capital raising by Xiaomi Corporation by way of series F financing.

Furthermore, he is assisting as the Cayman Islands and lead counsel to Complus Asset Management, a macro fund manager that manages over $2.8 billion in assets.

A client calls Plowman “hugely professional and efficient,” while another lauds his “knowledge, pragmatism, timeliness, availability and to-the-point advice.”

Vas, who has been in the industry for close to a decade, recently joined Loeb Smith as a partner in its Hong Kong office in December 2020 with a focus on banking and finance, corporate and restructuring transactions.

Vas previously worked for an international offshore law firm in Hong Kong where he acquired in-depth knowledge of the Asian market. Before relocating to Hong Kong, he worked for Sidley Austin in London and for another offshore firm in Jersey. Drawing upon his prior experience at these firms, he is heavily involved in broadening Loeb Smith’s presence in the banking and finance areas outside of its traditionally strong areas of investment funds and blockchain technology transactions in Asia.

Vas provided BVI law and Cayman Islands advice to China’s Shipbuilding Industry Corporation (CSIC) leasing on its first-ever ship lease financing, a $65.5 million sale and leaseback transaction with Eletson Corporation, a Greek tanker owner and operator. He has also provided BVI and Cayman Islands law advice to the steering committee of bondholders of certain notes issued by Kaisa Group regarding its restructuring of nearly 17 billion yuan ($2.63 billion) in offshore debt involving around 70 offshore vehicles. Additionally, Vas provided BVI and Cayman Islands law advice in connection with China Vanke’s participation in a consortium to take Global Logistic Properties private, a transaction valued at approximately $11.6 billion which was Singapore’s largest M&A deal on record and Asia’s largest private equity buyout at the time of the transaction.

“Peter is very knowledgeable of offshore legal matters, and is able to provide succinct, commercial advice in a timely manner,” says a client. Another says: “You know you can always count on Peter when you encounter offshore matters. He will coordinate everything for the client, and will always think more and think ahead than you do.